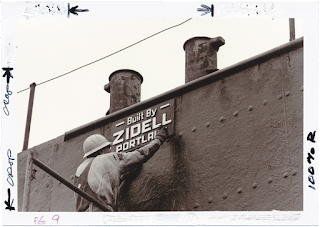 With a new year comes new members of the corporate Century Club! In the spotlight today is Zidell, a family-owned company based in Portland, Oregon.  Founded in 1916 by Russian immigrant Sam Zidell to sell second-hand machinery out of a scrap yard on the waterfront, by 1960 Zidell had become the largest ship dismantling operation in the country employing hundreds in the salvaging of ships after World War II.  Realizing that material from the ships could be put to new use, Sam's son Emery created a valve and tube forgings business and Zidell Marine, an innovator in steel barge design and construction. Run today by third generation Zidell family, a fourth generation family member has also joined the company to explore and develop new possibilities.

Posted by Vicki TenHaken at 8:12 AM